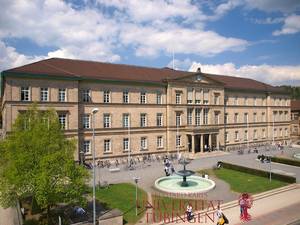 The story of the Tuebingen International Crisis Simulation begins in the summer of 2014, when two of our 2016 board members sat in a train back home from BerlInMUN. After having been inspired in Berlin, Karim and Maurice envisioned bringing the amazing concept of Model United Nations to Tuebingen. And finally – in October 2016 – Tuebingen  welcomed students from around the globe for the first edition of TICS.

TICS 2016, 2017 and 2018 were a huge success. Therefore, ten board members of TICS 2019 started planing our upcoming conference in April. We are beyond excited to meet many brilliant and open-minded students in Tuebingen once more.

Tuebingen fits perfectly for a smaller high-level conference. As a student town with long university tradition, a beautiful old town, short distance walks, and a great nightlife, it offers just the right environment for a Model United Nations. Moreover, the university considers itself highly international and so does our UN association.

We chose to have a crisis simulation, since it gives us the opportunity to have fewer delegates in more councils, which ensures faster processes, intimate debates, and high dynamics when it comes to the effects your decisions have on our own TICS – reality. A crisis simulation is interactive and requires the capability to make  quick, well considered and effective decisions. Last but not least, it brings you and us so much joy!

The Crisis Managers with the Crisis Director determine “reality”, while chairs, delegates and journalists are all actors and captured in that reality.

Our first edition of TICS covered the conflict that evolves around the Arctic. Eight Arctic nations constitute the members of the Arctic Council. Each has its own geopolitical, economic or scientific interests regarding the Northern Circle. The Arctic plays a significant role in our present and future, which made it a perfect and intriguing topic for TICS 2016.

Our second edition revolved around recent developments in South-East Asia and focused primarily on the stand-off between North Korea and the international community over its nuclear program. Delegates were tasked with finding a solution for this stand-off whilst avoiding all-out nuclear conflict between the interested parties. In addition to this, the crisis also had a second dimension involving the conflicting territorial claims in the South China Sea. Resolving the first crisis required states with conflicting views on the future of South China Sea to cooperate with each other providing a unique challenge for those participating in the crisis.

Concerning the topic for TICS 2018, we decided to engage our future participants in the decision-making process. We asked prospective delegates, chairs and journalists to send us a proposal for the Crisis of 2018.  The applicant who proposed the best idea was rewarded with free participation. We have already decided on a topic which we think will be highly interesting to discuss: Cyber Security threats on public systems.

The topic for TICS 2019 has just been determined and you can check it out here.